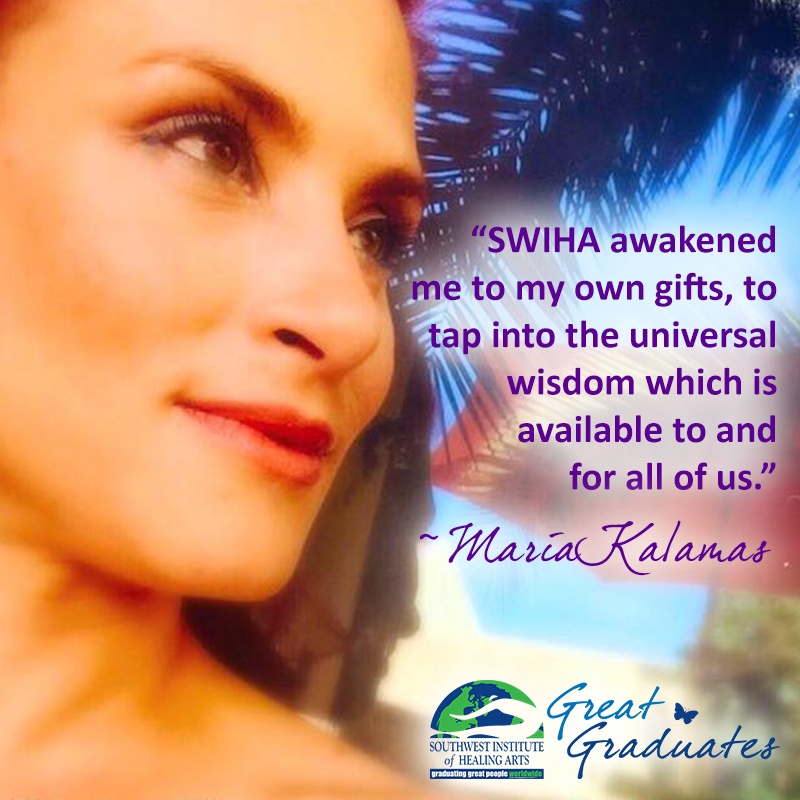 Maria Kalamas opens up to how purposeful her path has been and how her attendance at SWIHA was intended all along. “January of 2010, I was working in a doctor’s office employed as an office manager. The doctor was an MD, yet practicing alternative medicine, specializing in bio-identical hormones. He was helping people heal through proper supplementation, healthy nutrition, bio-identical hormone replacement, Chelation - which is a very effective way to treat heavy-metal poisoning - coaching and outsourcing them to various healing arts therapies, from massage to spiritual coaching and other various holistic practices that he had tried and believed were effective. I soaked in all the information he was giving me because I wanted to help heal people physically, mentally and emotionally,” shared Maria.

Maria was extremely grateful for the training that was so well aligned with her passion; yet she had a deep desire for more tools. This led her to the Life Coaching program at the Southwest Institute of Healing Arts. She received a complimentary pass to attend a weekend-long Life Coaching class, which was so divinely-orchestrated; Maria doesn’t even recall the specifics behind the gift, just that is was a life-changing weekend!

“I don’t even remember how I got the opportunity, however, that weekend did it for me. I signed up for the entire life coaching program. I wanted to pursue my passions and create a financially prosperous and fulfilling career that would provide for me and my two children.” Six short, inspired months later, she completed the program and felt there was more to be experienced at SWIHA.

Maria unapologetically and vulnerably expresses that coaching is a process of self-healing; she embraces her own process and sharing authentically, “I realized that, in addition to having a healthy mind, you have to have a healthy body. I was suffering from so many health problems myself, including digestion issues of bloating, sharp stomach pains, constipation, fatigue, mental fog, low back and neck pain, skin conditions, hormonal issues causing hot flashes and so forth - all of these problems had caused me to be anxious, stressed and to have angry, negative feelings resulting in outbursts of rage at times. This was contradicting my own teachings.”

During this timeframe, Maria recalls an important time where her journey to healing her body began with a simple invitation from a friend and her willingness to go. 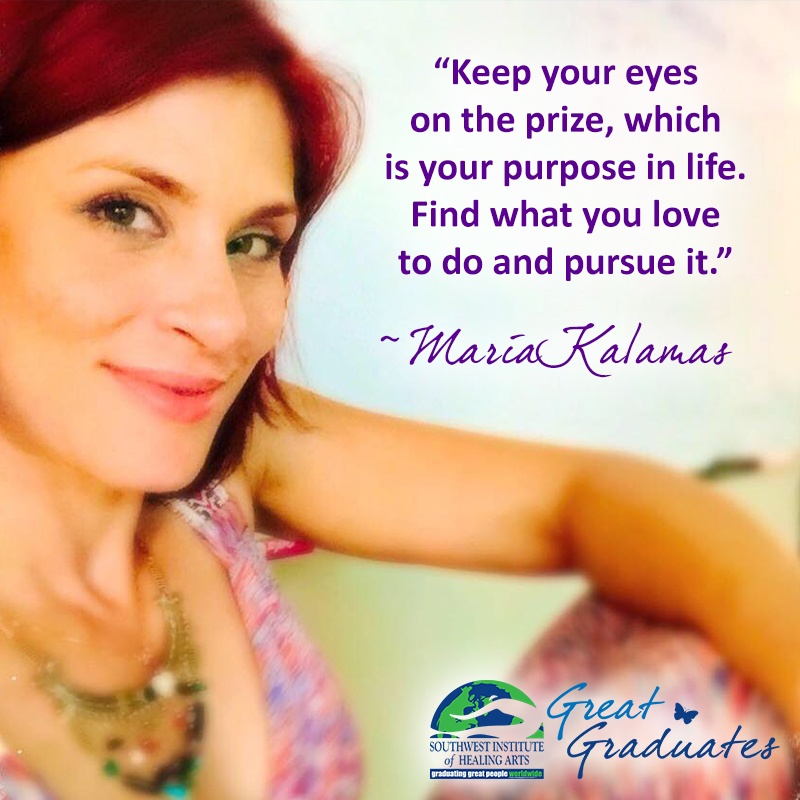 “A dear friend of mine that lives in Seattle invited me to visit her and stay at her home for a few days. She lived in a location where there were a lot of fruit trees and berries growing on the walls of the houses, so that first day we took a walk to enjoy them. During our walk, I stopped and picked some of those apples and berries and ate along the way, which made me feel even better. That’s when I had my BIG ‘A-HA’ moment. Visiting with my friends in a beautiful environment of love, care and support, eating ‘clean foods’ in the form of fresh vegetables and fruit from the local market, really brought me the awareness of how important foods are and how they manifest in the body. Just finishing the life coaching program at SWIHA a few months prior, I knew that there was something more and amazing that that school had to offer me. So, the 3rd morning of my visit in Seattle, I called SWIHA to sign up for the one-year Mind-Body Wellness program. And that was the beginning of my journey at SWIHA. I have obtained various certifications and completed my Associates degrees over the past 6 years of being at SWIHA. And, now I have been teaching there for almost 2 years.”

Maria has attributed so much of her success in both her personal and professional life to SWIHA. When asked what was most valuable, her response is generous. “Well, I learn every time I go there, I learn from my interaction with everyone. I learn about community. I learn about commitment. And I learn, of course, about the healing arts. The truth is I learned that I'm amazing! All of the knowledge that was being taught there, already existed within myself... as it exists within all of us. SWIHA awakened me to my own gifts and invites me to tap into the universal wisdom which is available to and for all of us. It allowed me to express myself in all of my weirdness. SWIHA is there to support me at all times. I've made wonderful friendships and it has brought me family. It showed me the way to where I call ‘home’. Everything I learned and continue to learn was and is valuable. Everything! If I had to choose one thing as the most valuable, it was truly finding and loving myself for all that I am and what I will be. I found contentment!”

Maria excitingly shares how it feels to be living in her passion. “I'm passionate about what I do, because I know it works. I know how it is to feel sick and physically in pain, both mentally and emotionally-imposed, and to be stressed.

However, I also now know how it feels to be healthy. I am physically, mentally and emotionally in the best health I have ever been. I have found the tools that I use myself and I'm passionate about sharing these tools to the people that wish to receive this information so they can find healing in their life too. It is a cycle of love and healing, it spreads like a ripple in a beautiful ocean.”

Not one to remain idle, Maria quickly secured her LLC within months of completing her Life Coaching program in 2010. “I am so grateful and proud of my company, Living Happy and Healthy, LLC. I have my own flourishing, private practice in Old Town Scottsdale where I keep my office and I see clients privately by appointment. I am also employed by a private club called Silverleaf Spa where I offer my healing services. I have been blessed with regular clients that I do mobile services for weekly, helping them maintain a healthy body and a healthy mind in the comfort of their own home.” 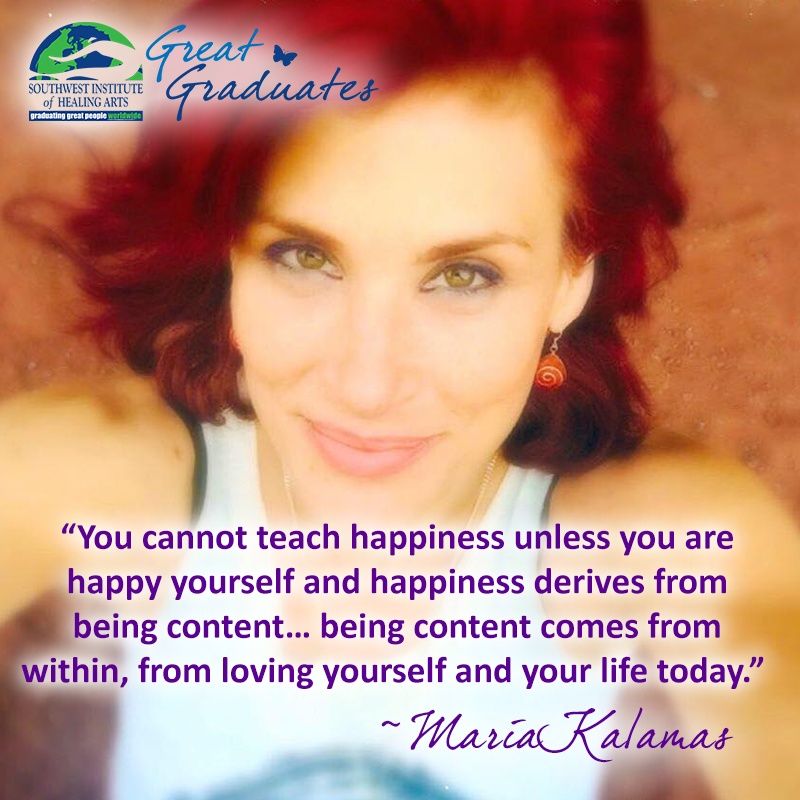 Offering a variety of services, supported by her various certifications and qualifications, Maria claims, “I am an energy worker. I apply energy healing to all of my practices. I provide Life Coaching, various styles of massage including, Hawaiian Lomi Lomi and Thai massage, Reflexology and Acupressure, Reiki and Polarity.”

Every client of Maria’s is acknowledged individually and their unique session goals met based on what their specific and most pressing needs are. “Everyone is different; therefore they will have a different experience depending on what their own goals are for themselves. I want my clients to feel comfortable in my care. I feel that I must develop somewhat of a professional friendship with them. They will experience love, compassion, comfort and positive results of the services I provide for them. It is important for me to have a connection with my clients and that is why I incorporate my energy work in each practice so I get a feel for their needs. My clients have experienced weight loss, physical and emotional pain elimination, and comfort even down to the way they perceive themselves and their lives in more of a positive and fulfilling manner. They experience rebirth. My goal is make them feel happy and healthy, hence, the name of my company Living Happy and Healthy!”

Maria’s clientele base is very diverse. From young children to older adults, healthy and sick, to even various species of animals such as dogs and cats. Maria explains, “They come to me for multiple reasons, seeking out help using the many services I provide and simply to feel and truly become ‘better’ – healthier and happier. It feels fulfilling. Simple as that; I feel nothing other than gratitude.”

As so many of Maria’s peers and like-minded professionals that grace the halls of SWIHA after her, she has advice for those on similar paths. “Keep on practicing. Set the intention, not just for yourselves, for your clients as well. Keep your eyes on the prize, which is your purpose in life. Find what you love to do and pursue it. You cannot teach happiness unless you are happy yourself. Happiness is sourced from being content. Being content comes from within, from loving yourself and your life today.”

Maria continues to emote: “I am a completely different person from studying at SWIHA. I had let go of old beliefs and open my mind. I have found my purpose. My studies helped me find the essence of ME. You never know what the future holds, even when it’s planned. It works out how it is supposed to, not always how you planned it.” 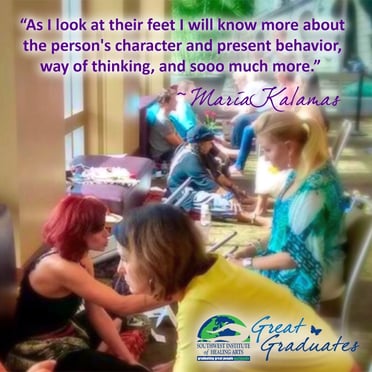 With so many clients and success stories over the years, Maria shares her fondest overall experience of success. “Oh my goodness, there are so many! The success comes from being present and having the client’s success in mind. As you’re healing the client, you are healing aspects and elements of yourself. I come from a very controlling environment and mindset, closed off. I have walked down many paths and been through physical and emotional pain. Yet I rose above it all. I overcame my obstacles placed before me. WOW, I am my greatest success story! When it comes to my clients, just bringing them happiness and comfort in their own skin is a success story in itself.”

“I am a very active toe reading practitioner and I see a lot of feet each day! I have learned that what I see and intuitively feel to always be true. My biggest regret is of the times I have second guessed myself and chose to dismiss my knowing. This past summer, I made a promise to myself.... To always look at someone's toes before signing any agreement and/or engaging in any type of relationship.... or at least, as I look at their feet I will know more about the person's character and present behavior, way of thinking, and sooo much more... Spooky but true!”

Maria has also been doing morning radio here in Phoenix on 99.1 FM. “I am invited to speak about mind/body/spirit connection to health and happiness and sharing many tips for success.” She is the Happy Health Coach that shares about holistic health, the power of touch, and life coaching. Such an amazing way to spread the word about health and healing!

To contact Maria and connect with your own happiness and health, you can reach her in a variety of ways:

You can find her on Facebook as Maria Kalamas
You can also find Maria on LinkedIn. Skype: maria.kalamas or in person at her Old Town Office location: 6991 E. Camelback Rd, D-300 Scottsdale, AZ 85251