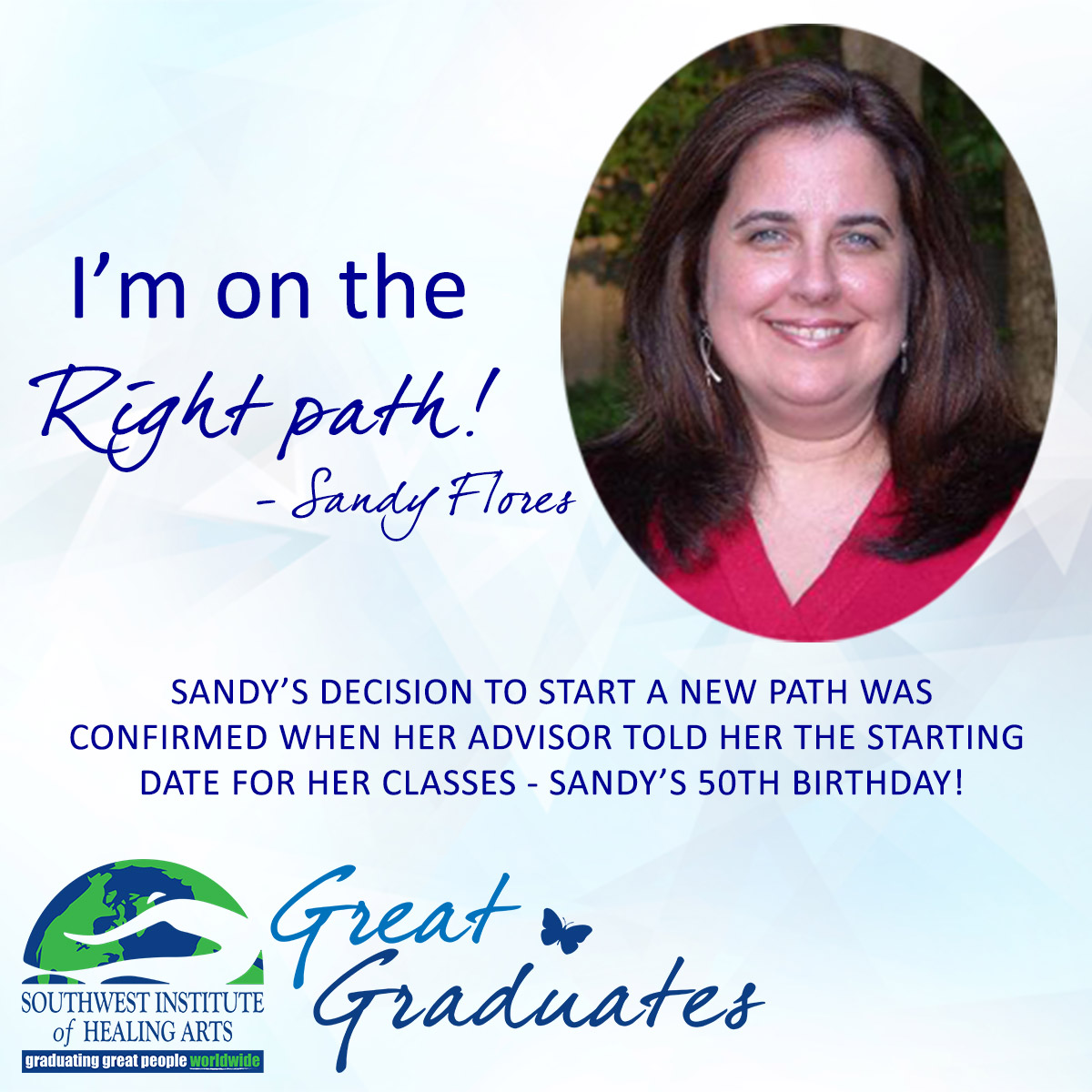 As her 50th birthday approached, Sandy Flores knew she wanted to do something special to honor the next stage of her life, now that she and her husband, Bill, had an empty nest. She always dreamed of completing her college degree and thought this would be the perfect time to focus on her and her passions.

As she looked at schools and curriculums, nothing seemed to fit her personality, interests, and goals. That is, until late one night, while looking at schools on the internet, she stumbled upon the Southwest Institute of Healing Arts (SWIHA). Just reading the College’s name alone seemed to bring a stir of excitement. Each and every class she scrolled through sounded interesting and life-affirming, which was something she desperately longed for during her mid-life crossroads. She felt butterflies in her stomach as she read that the school offered online classes for distance students. She began to entertain the idea that perhaps finding SWIHA was no coincidence at all. The next morning, Sandy called and spoke with an online advisor and by the end of the week, she was fully enrolled to study Holistic Nutrition and Hypnotherapy. The most exciting affirmation to her decision came when the advisor told her the starting date for her classes – Sandy’s 50th birthday! 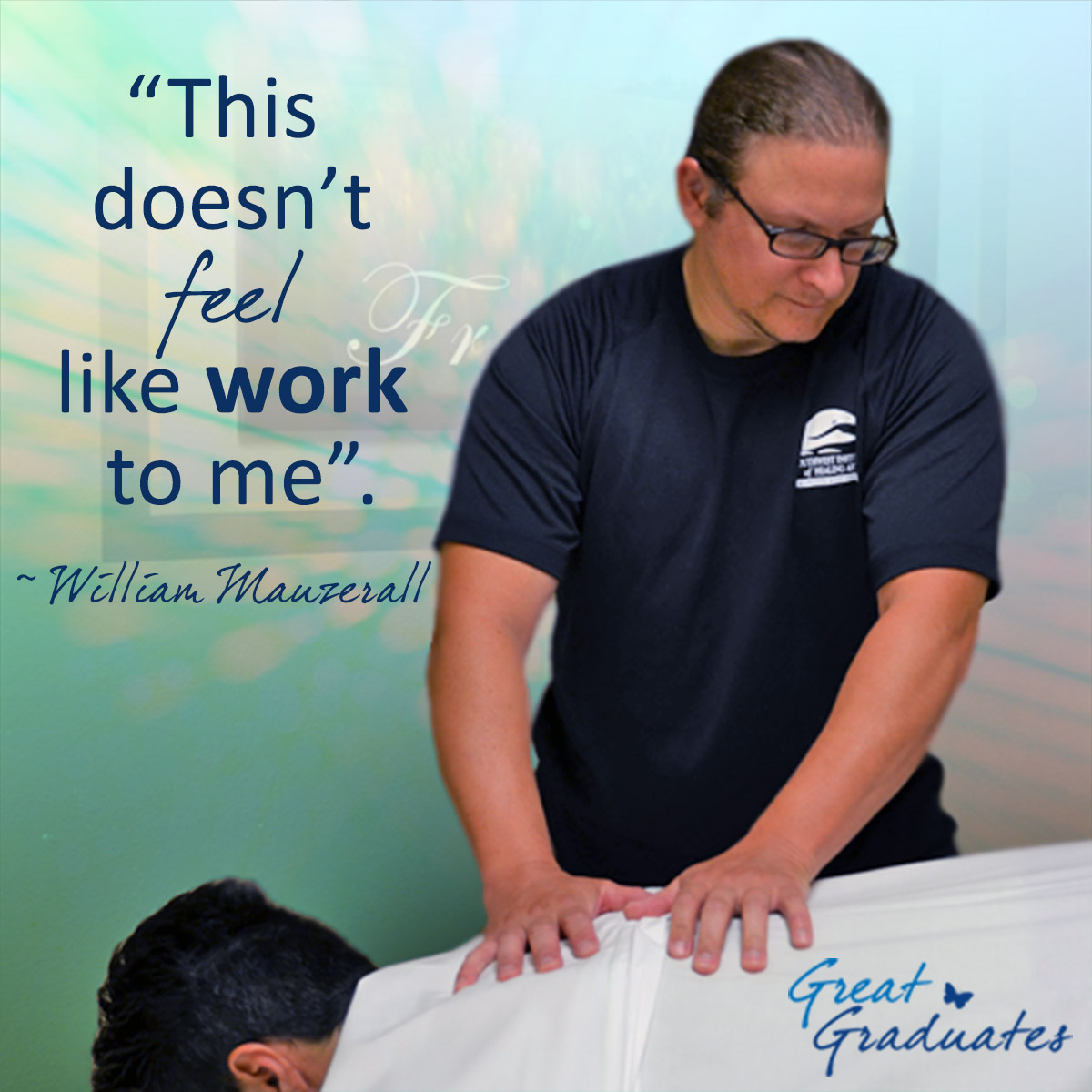 Massage Therapist William Mauzerall: Listening With His Hands and His Heart

William Mauzerall’s transformational journey from military service to massage therapist is an inspirational testimony of accepting and leaning into life’s opportunities. William, an honored military veteran, completed three years of services to our country and found himself at a crossroads after completing his military career. Having been fortunate to have the GI Bill assist with funding his educational dreams, William asked for guidance from his brother on the educational direction in which he should travel. William, a strategic thinker with an openness to consider many educational endeavors pursued the Massage Therapy program at SWIHA (Southwest Institute of Healing Art) for a few reasons: He would earn an associate’s degree from an accredited institution, he could enjoy the climate of the Southwest and it was a program that gave him man options to choose from in developing his gifts. William describes a peace and serenity in making his decision to pursue massage therapy through SWIHA -- he knew in his soul it was the right direction for him. In looking back on this decision, William now can see his footsteps to SWIHA transformed his life far deeper than a massage program.

As William began his program, he quickly found the coursework academically challenging. He embraced the notion that if the program did not challenge him, it would not change him. Through coaching and mentoring from his teachers, he learned the key difference between being a good massage therapist and great massage therapist is the ability to view the body as a whole instead of the sum of its parts. Through the life cycle of his program, beginning with the anatomy class, William learned the basics by breaking down the body to its simplest elements: molecules, cells, tissues and systems. As awareness and exploration continued through his coursework, William learned it is impossible to touch a body without understanding the impact on the whole body at every level.

As awareness and exploration continued through his coursework, William learned it is impossible to touch a body without understanding the impact on the whole body at every level. 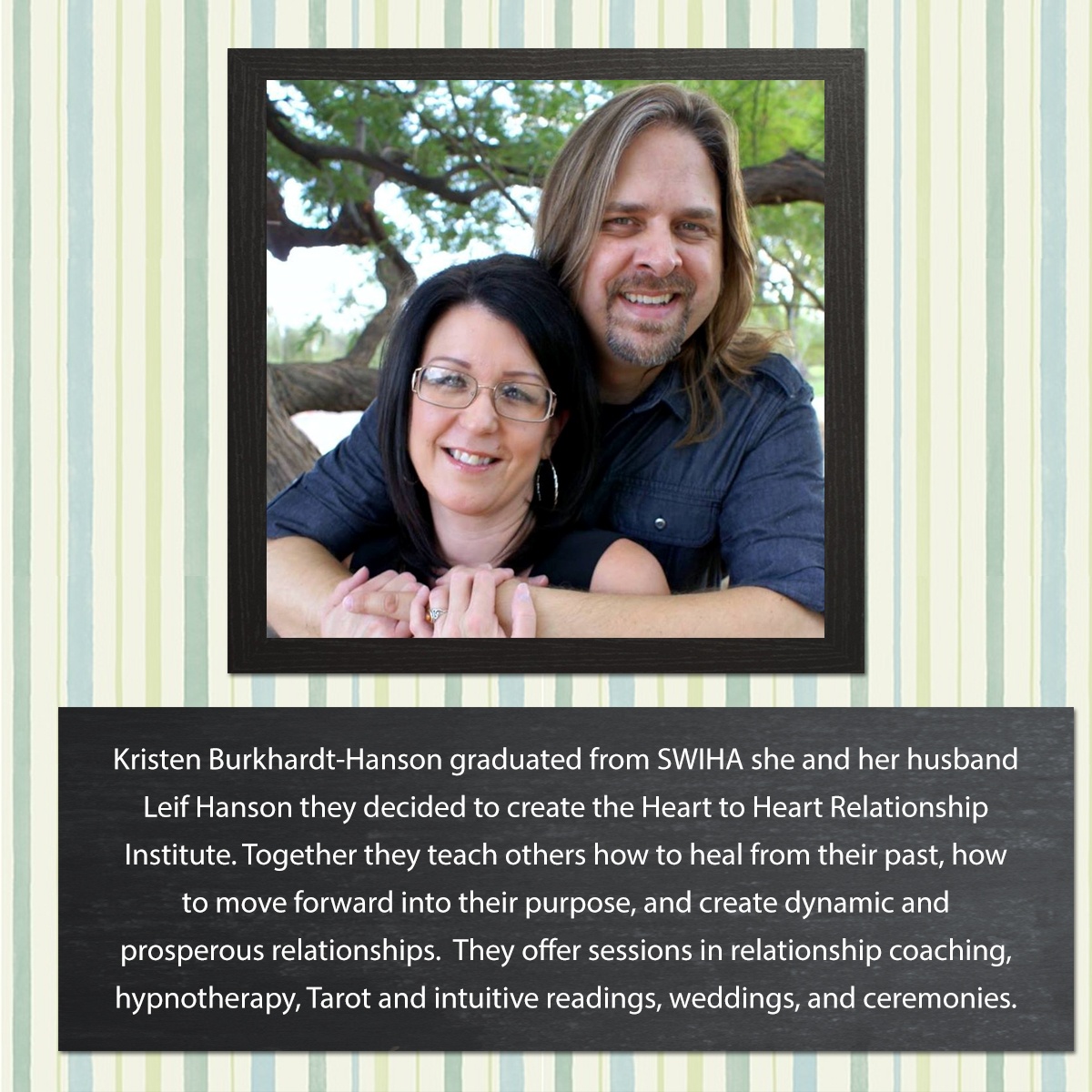 Kristen Burkhardt-Hanson had always been a troubled soul; she spent most of her life addicted to substances, alcohol, and making poor life decisions. She worked equally as long in the spa and salon industry and was over-worked, under-paid, and stressed out. She was longing for a different kind of life that gave her a sense of meaning and purpose.

Leif Hanson always felt alone and disconnected from the world. On the outside he appeared to be happy and easy-going, however, on the inside he was miserable and lacked confidence. At times he found it difficult to make friends and maintain a social life. He liked his job as a software engineer but he longed to have purpose and live life in an exciting and meaningful way; he just didn’t know what that looked like yet.

After both of their divorces, Leif and Kristen met online. After dating for a few years Leif moved Kristen to Arizona with her two daughters for a chance at a new life. They both became sober in 2010, and while they had the best intentions to have a fabulous marriage, they quickly discovered their behavior and attitudes from their previous marriages and experiences were beginning to seep in. 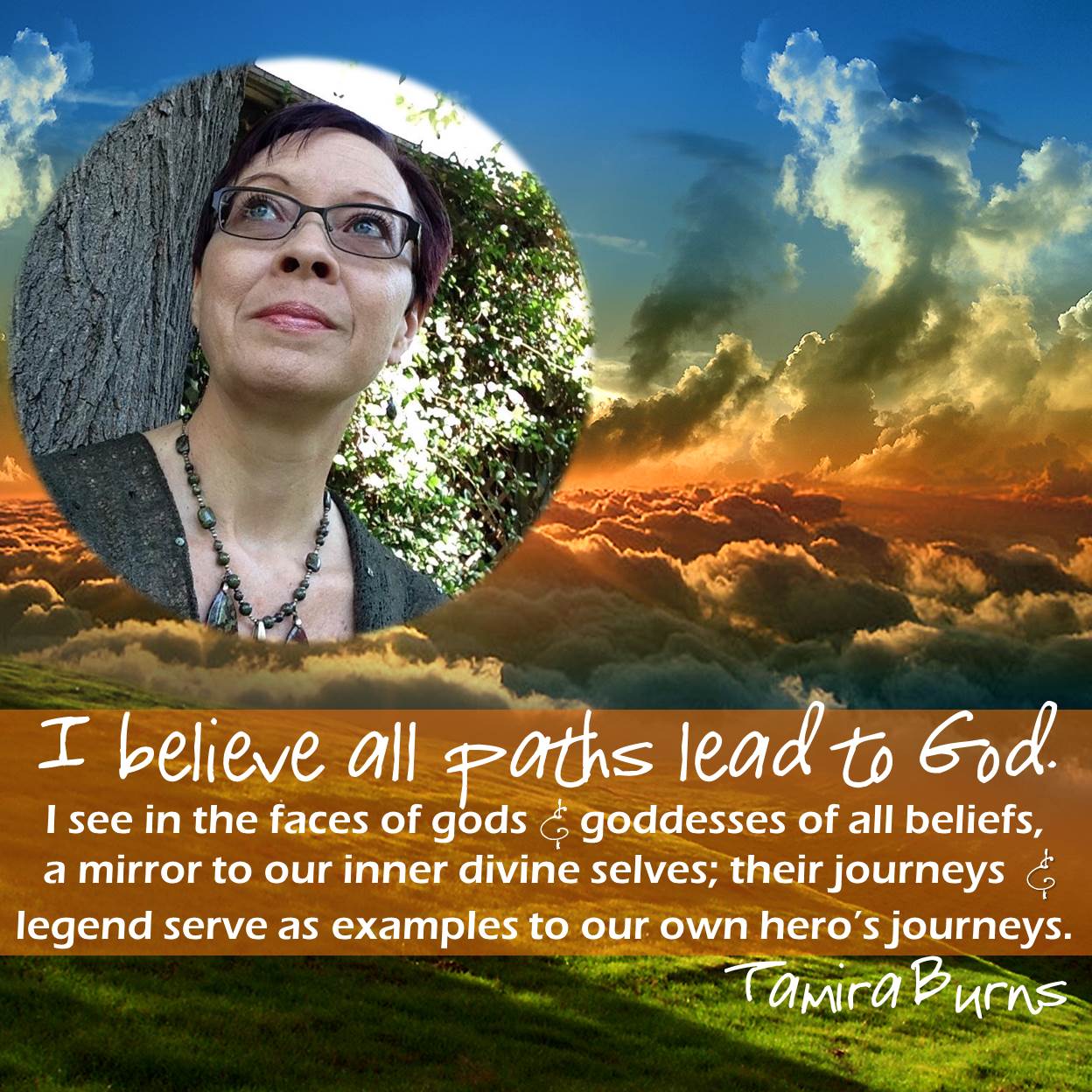 A Wandering Mystic’s Ministry of Compassion

Tamira Burns says she got “The Call” around age seven, in the form of a profound angel encounter that many might label as “crazy”, or the imaginings of a creative, gifted child.

“My heart felt like it would explode from the love I felt! The angel opened my path before me and advised me to follow my father, as he was a true child of God,” Tamira says of her angel encounter.

Tamira’s father was what she describes as a “secular humanist and a naturalist, who loved the earth and cared for all the creatures upon it with a profound love.” Her father felt that “god” was an ego construct of humanity to control the masses, and that churches were no more than a place to be reprogrammed, which confused Tamira as a child, as she did not understand the very personal relationship her father had with what he called “spirit” until she was much older.

Her mother was an excommunicated Catholic, abandoned by the church and stuck in a “spiritual orphanhood.” As a child, Tamira’s family did not attend church, and did not have a bible in the house. Her home was filled with books on nature and culture, anthropological journals and magazines such as the Smithsonian, Omni, and National Geographic.